From the Doctor's Journal 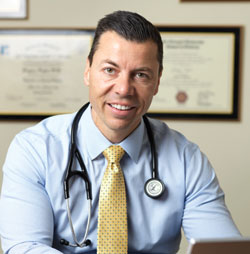 Anaphylaxis is a severe systemic allergic reaction that is rapid in onset and potentially fatal.1 Triggers for anaphylactic reactions mainly include foods, drugs and biologicals, stinging insects, latex, exercise, or unknown causes, and many studies suggest that the prevalence of anaphylaxis is increasing.[1], [2] A recent study2 examining lifetime prevalence of anaphylaxis in the United States found it to be common, with 5.1% of the US general population deemed as having “probable anaphylaxis” (defined as a reaction that involved 2 or more organ systems with respiratory and/or cardiovascular involvement) and 1.6% deemed “very likely” to have anaphylaxis when the definition included emergency or hospital treatment and the feeling that their life was in danger.

Management substantially relies on education with regard to avoidance, recognition of symptoms, and proper administration of medication.3 Epinephrine delivered intramuscularly into the anterolateral thigh through a prefilled epinephrine autoinjector (EAI) is the initial treatment of choice as emergency supportive therapy for anaphylaxis in the outpatient setting while medical care is sought.[1], [3], [4] EAI devices must be readily available because delayed use has been associated with an increased need for hospital admissions after anaphylactic reactions and a greater risk of fatal anaphylaxis.[3], [5] In addition, reports indicate that 16% to 35% of anaphylactic reactions require a second dose of epinephrine because anaphylaxis at times follows a biphasic course and at other times may be protracted and not respond to initial treatment.6

Currently, the 4 EAIs that are commercially available in the United States as a single dose of either 0.15 mg or 0.3 mg are as follows: EpiPen/EpiPen Jr (Mylan Specialty LP, Basking Ridge, New Jersey), Auvi-Q (sanofi-aventis US LLC, Bridgewater, New Jersey), Adrenaclick (Amedra Pharmaceuticals LLC, Horsham, Pennsylvania), and epinephrine injection, USP autoinjector (Lineage Therapeutics, Horsham, Pennsylvania). With the exception of epinephrine injection, USP autoinjector, launched in June 2013 as the authorized generic for Adrenaclick, there are significant differences among the various EAIs, including variations in appearance, design, operational instructions, the contents of the package, and cost. Because of the distinct features of each EAI, training on how to correctly administer the product differs as well. Training and education are critical because the onset of anaphylaxis is rapid, and timing and proper administration of the EAI are key to ensuring a more favorable outcome.[3], [5] If the product received at the pharmacy differs from the product for which the patient or caregiver was trained, there is an increased risk of confusion and hence a potential delay in treatment during the highly stressful time when treatment for an anaphylactic episode is required. This can lead to a worsening clinical outcome, increasing the patient’s risk for hospitalizations and fatal anaphylaxis.[3], [5]

The varying distinctions among the available EAIs have led the Food and Drug Administration (FDA) to recognize that these devices are not interchangeable and that a generic EAI should not be substituted for another EAI. Innovator and generic products that are approved by the FDA are listed in the FDA’s Approved Drug Products with Therapeutic Equivalence Evaluations, commonly known as the Orange Book.7 Within the Orange Book, the FDA has developed a coding system that determines whether a drug product is considered therapeutically equivalent.[7], [8] To achieve an A rating, a generic drug must demonstrate that their product is bioequivalent or that it performs in the same manner as the original drug.[7], [8] It must be comparable to an innovator drug product in strength, dosage form, quality, route of administration, performance characteristics, and intended use and must be able to deliver the same amount of active ingredient into the patient’s bloodstream in the same amount of time as the innovator drug.[7], [8] In the case of EAIs, there are no products that meet these criteria; hence, no EAIs are rated A by the FDA.7

A generic drug that cannot meet the FDA’s bioequivalent standards is given a B rating.7 In most states, drugs rated B cannot be substituted at the pharmacy level.8 The FDA has assigned EAIs with a BX rating, which is specifically designated to drug products rated B for which the data are insufficient to determine therapeutic equivalence.7 Drug products rated BX are determined not to be bioequivalent, and state boards of pharmacy regulate substitution laws for these drug products.8

Among health care professionals, pharmacists are in the unique position of having the ability to choose a differing drug product with which to fill practitioners’ prescriptions. Pharmacists can substitute drugs rated A at any time, but drugs rated B may only be substituted in 21 states, when specific conditions are met; otherwise, substitutions are not permissible.8 Table 1outlines the states that allow substitutions of drug products rated B. Certainly, cost could represent a major consideration in patients’ or pharmacists’ decision to make a substitution at the pharmacy level because generic EAIs are significantly less costly than their branded counterparts. Prescribers should consider this, along with all the other factors that make each EAI device unique, and should weigh all these options with their patients. Once a decision is made, substitutions at the pharmacy level can be prevented by indicating “dispense as written” or “brand medically necessary” on the prescription. This is especially important in those states where substitution for EAIs rated BX is allowed. A collaborative effort between the prescribers and pharmacist would be ideal because EAI training is often incomplete,9 and it is critical for pharmacists and physicians to understand the potential consequences when a substitution is made to a device in which the patient has not been properly trained because proper and timely use is imperative to reduce subsequent morbidity from anaphylaxis.

Disclosures: Author has nothing to disclose.